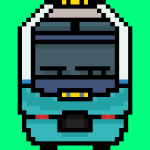 By arkh,
August 20, 2021 in Other Hobbies: Games, Simulations, Models & Photography